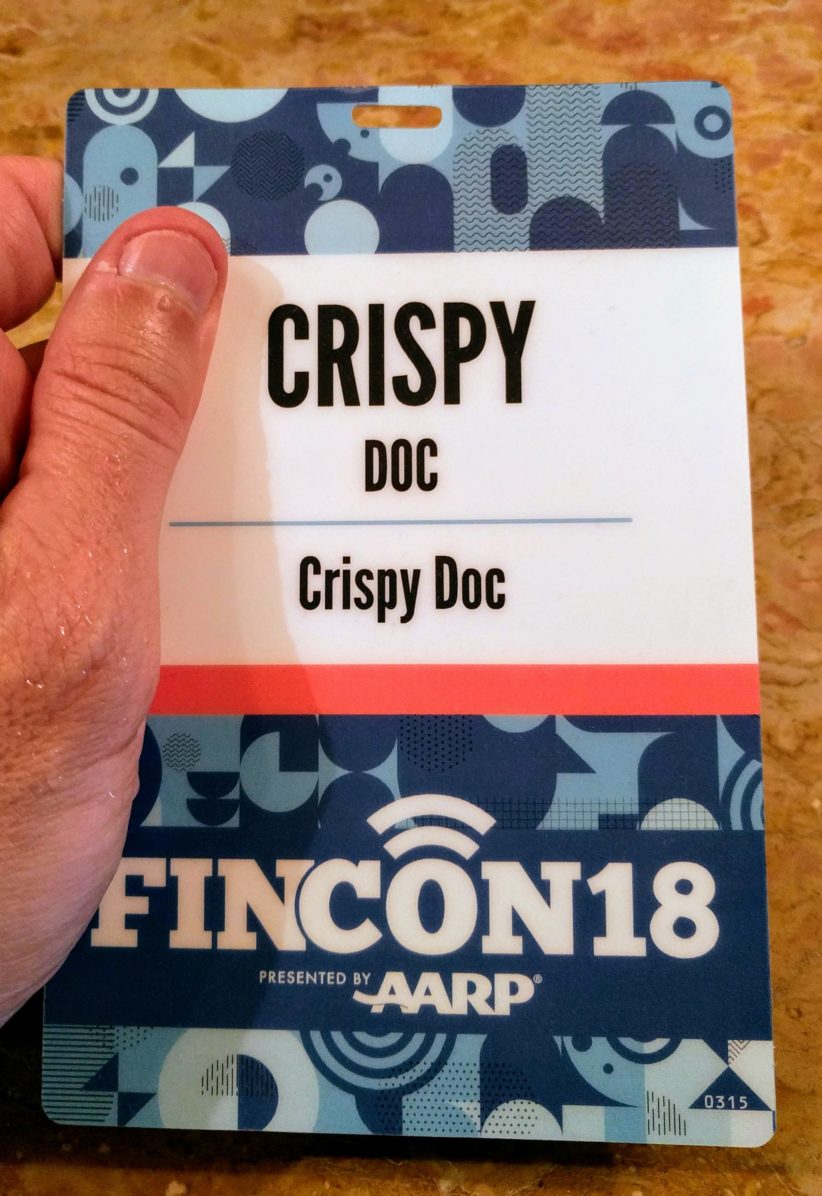 Fin. In Spanish it means the end.

Con. In Spanish it means together.

Many finer writers have gone into comprehensive reviews over the fellow bloggers they met, the internet famous superheroes they ogled and adored, and the lessons learned for their digital businesses. I’m going eschew the comprehensive approach.

Here, then, are a few hyper-specific FinCon moments that captured the experience for me.

After a party full of the big dogs of the FIRE movement, I found myself in a hallway on a couch with a couple of new friends, beer in hand. A gregarious bear of a guy wearing a kimono three sizes too small wandered over and plunked himself down on the sofa.

Sean and I started talking FIRE philosophy: front-load work and exit all at once, or glide path to where you selectively do the work that means the most to you but brings in just enough income to fulfill your needs? Or as Def Leppard posed it: Is it better to burn out than fade away?

Sean called over another blogger, 5 AM Joel, and we proceeded to have the sort of deep dive hour long first conversation that I’d last encountered during freshman year of college. It was a throwback to those times in your youth where every idea you stand for is on the line and open to debate.

It was a beautiful moment, it seldom happens in your 40s, and I’m grateful to Sean and Joel for that hour of connection. While we won’t be joining the same bowling league, I’m comforted to know two other people floating out there in the ether think about this stuff.

OthalaFehu, a blogger whose eccentric writing style, intricate pagan references and deep trove of useless knowledge have endeared him to me over a couple of years, was planning to attend FinCon as well. We made plans to meet for lunch.

One of the greatest fears you have as a blogger is that the person you meet and like online may turn out to be a complete dud in person; may not like you; may offend you or be offended by you. None of these fears materialized.

We connected on multiple levels: maintaining anonymity as bloggers, fatherhood with similarly aged kids, being husbands, why attorney bloggers lack the collegiality of physician bloggers (hint: trials are adversarial by design).

Our most meaningful time was spent discussing how you fit the baggage of youth into overhead compartments as adults, something I inquired about (and he replied) with great candor.

We wrapped up with an anecdote involving an obscure but winsome David Bowie song. He also showed me his tattoo of a DL-44 Blaster (the weapon used by Han Solo in Star Wars).

Physician on Fire is an online friend and role model for many docs in finance. I’m grateful to him for generously inviting me to be one of his helper elves, and I proudly don the required uniform of green overalls and feathered cap to help administer the Physicians on Fire facebook group.

On finally meeting him in person, I can confirm he’s every bit as down to earth and humble as I’d hoped. But the real excitement? That would be finally understanding PoF’s secret weapon: his wife.

To be clear, this is not written from a covet thy neighbor’s wife perspective. It’s more that after a series of chances to chat informally, pick her brain about their upcoming plans to home school in an RV traveling across the US, hear how they first met, be gifted a neon bracelet “just because,” and get a sense of their dynamic as a team, I can completely understand why PoF’s audacious plan to FIRE next year and roam the world with his family is bound to succeed. It takes two to make things go right. He picked the right number two.

It turns out I picked the right twenty-two, which is the rough number of doc bloggers that attended FinCon.

My fellow docs turned out to be the best coed fraternity of misfits I never pledged – a collection of men and women ranging from bright-eyed residency grads to crusty veterans to everything in between. I’d planned a dinner for physician finance bloggers, but a couple of back to back happy hours (a happy day?) offered us all a quieter opportunity to get to know one another casually before the dinner.

The folks I met are pioneering unconventional career paths. We were comforted by the uncanny realization that we had similar aspirations to enjoy meaningful careers without letting medicine constrain us. We center our lives around our values. We are weird in the same way.

Interstitium is an anatomical term applied to the space surrounding cells and tissues, the area just outside of the tissues (where the action is) but connecting it all. In medicine, this space is pretty much ignored. At FinCon, it turns out, the interstitium was a major part of the experience.

I’d leave one talk intending to make it to another lecture, and veering from the plan at the last minute I’d introduce myself to someone new; pick up the previous night’s conversation with a friendly face walking in the opposite direction; or throw an arm around one of the docs in finance who, despite meeting for the first time at FinCon, made the weekend feel like a reunion of old friends.

No one better exemplified the beauty of the interstitium than the Waffles on Wednesday, a husband and wife team from LA. They were welcoming of newcomers, comfortable in their skin, and quick to take folks under their broad and protective wings.

They were quick with an introduction to whoever happened to be in their orbit, which centered around a large inflatable flamingo in the hallway which was conveniently located next to a never-empty cooler of beer.

They, more than anyone I met, embodied the spirit of FinCon, which is as much about soaking up the unexpected pleasures of the in-between moments as about making it to the scheduled events.

The pursuit of FI need not be lonely. Your tribe of kooks is out there. Savor the pauses.